Dyslexia vs Muhammad Ali a tribute to a champion

Why was Muhammad Ali the Greatest? because he fought through one of the worlds greatest’s disabilities than many of us face Dyslexia

When he was a child born into severe poverty in America and was considered “slow” in school (later to be discovered he was dyslexia ) he was expected to be a sign writer like his father. After having his bike stolen he took up boxing and showed through his dedication to the sport how anything is possible, a true demonstration of the American Dream.

In a time when a beast ruled the heavyweight division he showed how speed and pugilistic skills beat intimidation and raw power. He broke down race barriers, being the first black heavyweight champion who neither followed the Joe Louis rules nor prompted a search for a great white hope. He stood up for what he believed in, at a very high cost he refused to go to Vietnam, he was offered an easy time there similar to Louis in the Second World War but would not compromise on his beliefs even though this left him broke. 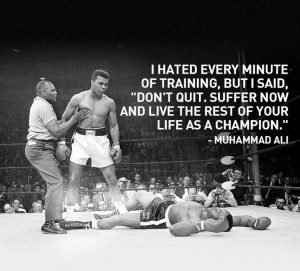 When his body would no longer do what he needed it to he changed his style, adopting a rope a dope style on his return and bulking up he learned to box again. He stopped a civil war in Manilla for 6 weeks while he and Joe Frasier fought their third fight. He won the heavyweight title 3 times, one of 3 people to do this. On retirement he talked down a man who was going to commit suicide, he negotiated the release of 15 hostages, became a UN ambassador and spoke out against fundamentalist Muslim groups. There are more books written about Ali than any other person in history, and in death he has given us at least a few days when the world does not continue the hate campaign against Muslims.